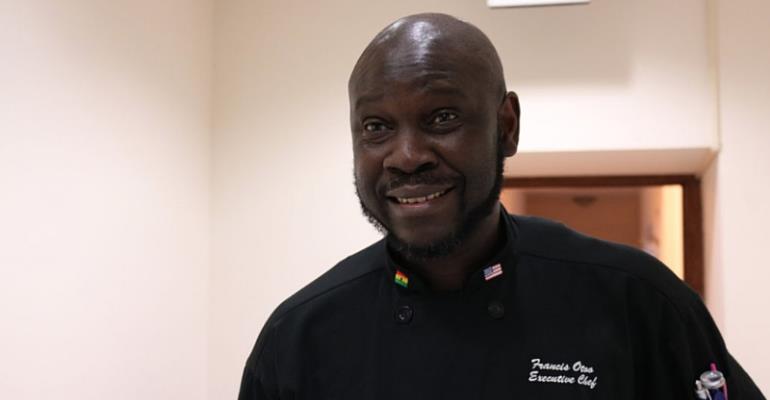 Francis Otoo, Maplewood’s award-winning Executive Chef, is a tall man with a big voice and an even bigger heart. With an enchanting personality and an exacting approach to the culinary arts, he moves fluidly through the international circles of haute cuisine. To say he’s having an exceptional career may be an understatement.

Chef is also a seasoned entrepreneur, managing his own catering company, Fransar Catering Services (a blend of his name and wife Sarah’s). Company tagline: “Serving the world on a spoon since 1990.”

Growing up in Accra, Chef dreamt of becoming a physician. But as he watched his grandmother in the kitchen, a new passion percolated: cooking. With characteristic determination, he set out to learn the art, attaining his country’s highest culinary degree. His education continued with numerous classes in London and the U.S., including studies at Strayer University.

Chef and Sarah moved to the U.S. in 2002. He served as executive chef at the Ghana Embassy for four years, followed by four years of service as the banquet chef at Hilton Alexandria at Mark Center. In 2009, he assumed the post as Maplewood’s executive chef. Today, he oversees meal preparation for Maplewood’s three dining venues and manages a staff of 16.

“Many of our residents have travelled extensively or
have lived in other countries. They expect an exquisite dining experience, and we strive to deliver that with every dish.”

Chef’s life passion is simply stated: serving up delicious meals. He sees cooking as an art and approaches each dish with a creative mindset. “It’s not just about the taste,” he says. “How food is presented is equally important. When people see your presentation and want to taste it, you know you’ve hit the mark.”

Each meal is an opportunity for fresh inspiration. “Many of our residents have travelled extensively or have lived in other countries. They expect an exquisite dining experience, and we strive to deliver that with every dish.”

For example, an outdoor dinner for Maplewood residents led to a new creation: summer salad in a radicchio cup, with Israeli couscous, mango, pomegranate, and Chef’s original dressing. The residents raved! Other popular creations range from shrimp fritters made with black-eyed peas to parmesan cheese–encrusted salmon and marinated rack of lamb.

Chef ‘s culinary confidence comes not only from his skills but also from his abiding spiritual convictions. “I am grateful to God, who brings creativity to whatever I make.”

“It’s not just about the taste.
How food is presented is equally important.”

Along with his day-to-day menu creation, Chef is the driving force behind Maplewood’s special culinary events, along with catering for private parties. The monthly Captain’s Table, an elegant welcoming dinner for new residents, features beautifully prepared food and wine in the private dining room. Special Wine Dinners offer four distinctive courses paired with diverse wines selected from a sommelier. Periodic internationally themed dinners showcase cuisine from around the world. Holidays and festivals, from Easter to Jewish Sader, St. Patrick’s Day to Oktoberfest, are celebrated in grand style.

Chef also conducts cooking demonstrations with residents, offering an up-close experience of how he assembles his unique creations.

Competing on the global stage

For 10 years, Chef has participated in the Embassy Chef Challenge. There, participating Embassies feature and promote their culture through cuisine while guests delight in samples from around the world. One of his winning specialties is the popular Ghanaian delicacy “Aponkye Nkrakra,” or goat light soup, served with tenderly boiled yam and noted for its “juicy taste” and “gentle spicy kick.”

Chef’s talent doesn’t stop with food. He also creates exotic beverages. His “Ashantie Mojito Mocktail” received the Best Beverage Award at the 2019 Embassy Chef Challenge. “It’s made from pressed fresh ginger with lime juice swimming in Ghanaian spices with some simple syrup infused with fresh mint,” he explains. The Chef’s ginger recipe has been transformed into a mix and will soon be marketed through his catering company.

Although work keeps him plentifully busy, Chef finds time to relax with Sarah at their Burtonsville, Maryland, home. They have three children: Cecilia, 24; Gilbert, 19; and Francis Jr., 17 – who’s already showing signs of following in the family business. 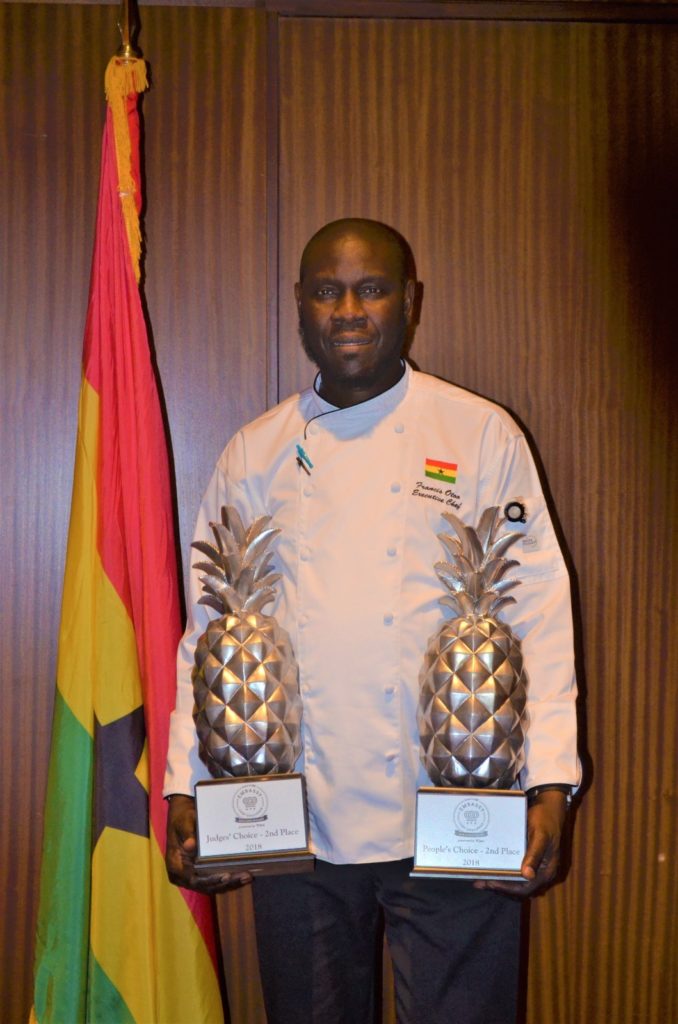