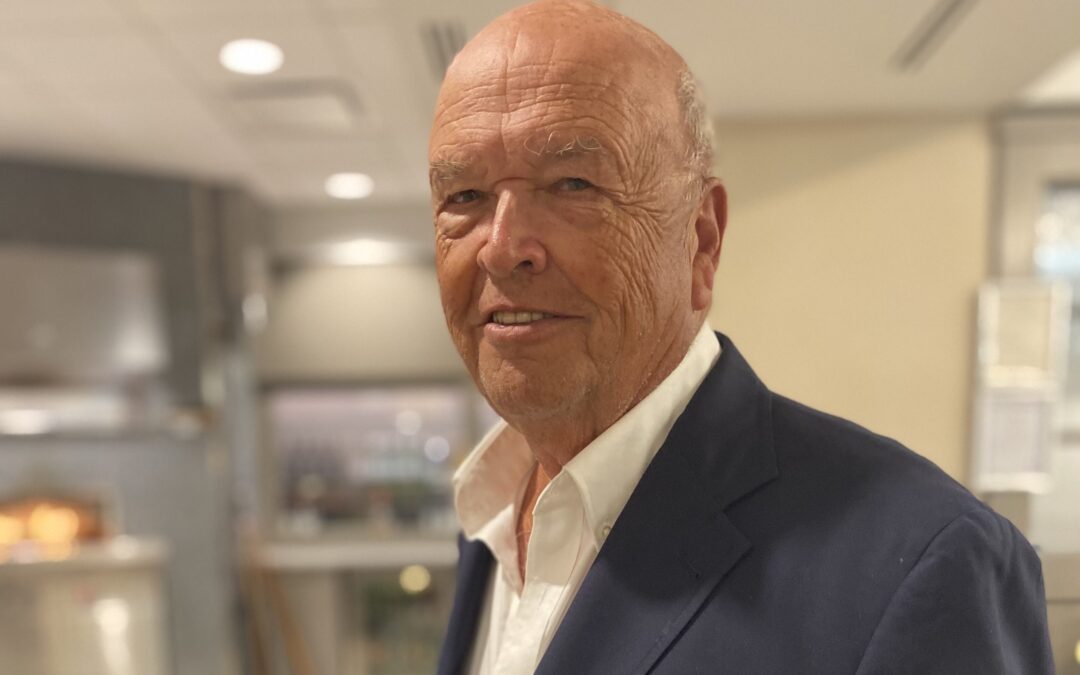 At Maplewood Park Place, every resident has a unique journey that has brought them here. We’d like to introduce you to owner/resident Richard Hotvedt who recently settled into his new home this spring. Although Richard lives alone, he chose Maplewood to be close to his wife who requires additional memory care.

Roots in the Mid-Atlantic region

Richard and his wife have lived in the Washington area since the 1960s. Neither of them were born in the area, but after all these years it’s definitely where they call home. Although they are native Midwesterners, they both attended college in the 1950s on the East Coast. The pair settled in the Mid-Atlantic region after graduation, Richard from Harvard and his wife from Smith College. They had children and eventually moved to Bethesda, Maryland, to raise their family. Richard worked as an attorney until his retirement in 2000. Since then, he’s kept busy teaching and volunteering.

Richard is one of the newest residents. He toured a few places around the area but felt the sense of community here right away. Unlike traditional Continuing Care Retirement Communities (CCRCs), residents of Maplewood own their homes here, allowing for custom renovations. “The apartment was nice but needed refurbishing, which was accomplished by the seller under the guidance of the Maplewood team. They installed a new kitchen and bathroom. They also made some adjustments based on my requests, such as changes in the kitchen and installing wall-to-wall carpeting in the bedrooms,” Richard explained.

Richard and his wife began looking at alternative living situations last fall. Although memory care was the correct decision for his wife, Richard did not need the same degree of care. They still owned their home, but no longer wished to maintain it. Thankfully the Maplewood sales team assisted him in coordinating a bridge loan while he sold his home.

“When you’re a senior, especially if you’re a guy, you’re faced with how to furnish an apartment. How much stuff do you need? I would counsel anyone in my situation to take only what you need, and you don’t need very much. Make sure you’ve got a bed for this room and a bed for that room. Make sure you’ve got one bookcase, not two or three bookcases. Make sure you’ve got a dresser, not four dressers. Just the bare essentials. What I’ve noticed is that people tend to try to decorate a two-bedroom apartment with the stuff they accumulated in a four-bedroom house, unwilling to let go of this or that. My sons and I got rid of as much as we could. In the end I had to acquire very little. I got some new things to make life nicer in an apartment, like some reclining chairs and a big wall television. Strip down and build back up to a minimum. That’s my gratuitous advice to people in my shirt and shoes.”

Richard is grateful to have friends and family in the area. From his golf friends to his Harvard alumni association, Richard has a thriving social life. When his granddaughters come to visit there are many attractive amenities, social rooms, and dining options to enjoy in Maplewood. He’s looking forward to getting more involved with the activities and exercise classes in the coming months. He’s been a member of a local country club for years and will remain for as long as he’s able to play golf.

Another thing Maplewood does well is welcome its new residents. “In the first month I was here, I was fairly overwhelmed with invitations from neighbor to neighbor and the Maplewood Hospitality committee. I’ve had many nice and pleasant evenings.”

Dining is also a social event at Maplewood. It’s a perfect time to socialize while enjoying a delicious meal and libations. When Richard is feeling less social, he might grab a quick dinner to go and head back to his home to enjoy some television with dinner to go.

One of the more humorous social interactions he’s had so far has been “bumping into an immediate neighbor on my apartment floor who recognized the name Hotvedt because she had gone to Smith with my wife. In an instant, she recognized me and wanted to know how Kathy was doing. That kind of thing has happened over and over.”

Richard officially moved into Maplewood Park Place just a few weeks ago but has quickly adjusted to the fun and liberating lifestyle. In addition to visiting his wife Kathy each day, 87 year old Richard can be found participating in the diverse Maplewood activities throughout the day, working out in the gym, or on the putting green at his club, enjoying the Maryland summer sun.

Call 301-571-7444 to learn more about what customization options are available to you as well as the many lifestyle choices Maplewood has to offer.

×
Our fitness center features a heated indoor pool and whirlpool, with a full-time lifeguard on duty. (Your children and grandchildren are welcome!) Our personal trainer will help you create a personalized fitness plan, and our weekly classes, from Tai Chi and Zumba to yoga, balance, and water aerobics, will keep you in top condition.
×
Our recently renovated library is a beautiful room, filled with lively artwork and basked in warm southern light. Open 24/7 and well managed by our devoted Library Committee, it provides a soothing ambiance and comfortable places to sit, read, and catch up with your friends. Browse our vast selection of books in hard cover, paperback, and large print. Join the book club for monthly discussions. You’ll even find books written by owner residents, along with an ever-changing selection of magazines, newspapers, audio recordings, CDs, and DVDs.
×

What is Skilled Nursing Care?

A skilled nursing facility is also known as a nursing home. Skilled nursing homes provide typical senior living services, with the addition of a high level of medical care, typically found in a hospital setting.

What is Personalized Memory Care

What is Assisted Living?

Assisted living is for seniors who value their independence, but need some assistance with daily activities, such as bathing, dressing, transportation, and medication reminders. They may live in their own suites or with a companion and are relieved of household chores, such as laundry, cooking, and cleaning.

What is Independent Living?